Kathrin already wrote about our first week, so I take the chance to update you on our second week after the launch of our LIKE A HIPSTER app.

It’s now been two weeks since our mobile app LIKE A HIPSTER hit the app store. LIKE A HIPSTER is a SOcial LOcal MObile app, that helps users find venues with a hipster vibe in their neighborhood. We pretty much went:

So it was quite an exciting time and I want to share some thoughts I had during the past two weeks.

Have you ever watched Big Bang Theory? If yes, then you probably have a pretty good idea of what my life looks like at the moment. I (the Ami) have a temporary roommate. Her name is Kathrin and she’s a marketing guru, and the Penny (Don’t tell her I said that!).

Two weeks ago we had lunch together in one of our favorite restaurants and we discussed my current project the Hungry? app, a restaurant finder app based on the Foursquare and Yelp APIs I wrote because I got used to and bored of my common eateries and I wanted to discover new places resp. I wanted to get good restaurant recommendations when traveling. So I asked Kathrin about her opinion on the app and she said, that she likes it but she would not use it but use directly the Foursquare or Yelp apps instead. She would use it if there was some special attribute available… such as… (she glanced around in the restaurant)… hipster places! Suddenly our eyes popped and we got very excited about the idea, so we went home and started working on the “Hipster project”.

So we went home and I forked the source code of the Hungry? app. Kathrin did some research on a hipster logo and after a quick hack in Photoshop our corporate identity was fixed: pink, unicorn + cat = caticorn / unicat.

My first idea was to make a spin-off of the Hungry? app and to name the app “Hipster?” but Kathrin had a better idea and found out that likeahipster.com was not taken. So she setup a Facebook page, Twitter, and Instagram account – later also a YouTube channel.

She also found a street art picture under CC license with a lumber-sexual guy and we adopted him as our “Hipster Oida” (literally “old hipster guy”) – our ambassador and face of LIKE A HIPSTER. After forking the code I rebranded it, changed the colors and icons, added “hipster” as search term to the API calls, and set up the Google Play Store page.

We quickly launched the website, app, and other social media channels until the end of the day. 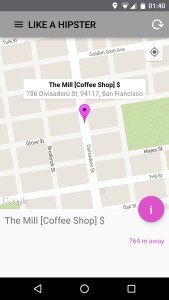 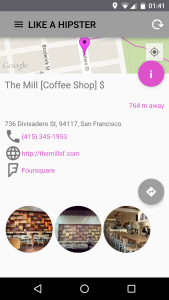 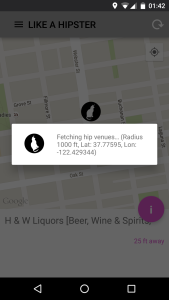 Some insights and highlights:

The Results Are In!

We decided to be as transparent as possible about our processes so I set up a blog to write about our progress and share some insights. I also configured some ads for our app with Goolge AdWords with a Mickey Mouse budget of 5€ per day.

Additionally Singapore Airlines asked us if they could feature our app in their monthly magazine Silverkris!

And we got some really funny reviews in the Google Play Store and other reactions on twitter. My favorite:

likeahipster.com/?ref=producthu… Have we as a society gone too far?

A crazy and brilliant geolocatization app: LIKE A HIPSTER ow.ly/SYHPV

I was (and am still) totally overwelmed with this positive feedback we got for our app. My key learnings:

As I already mentioned we bootstrap our business and have no money what so ever but our private money to invest. Besides the 5€ a day marketing budget on Google AdWords I installed some cross-app “in house” promotions which are for free in AdMob. So on Hungry? there are ads for LIKE A HIPSTER and vice versa. And as you could see in the graph above we gained approx. 40-50 users each day. (I launched Hungry? two weeks earlier so I got about 630 downloads there so far – interestingly both apps are performing quite alike, although we thought that the user groups are different.)

And I figured out I love performance marketing. Some numbers: Implement new features (rework of the UI to better match Material Design is done) and try to monitarize the app further. Catching good press coverage and submitting the app to app review sites. And I really need to take off a week or two to implement the iOS app – we’ve obviously got a really high demand for iOS.

One word (or two) about Continuous Delivery.

Continuity in delivery could be boon and bane. I try to release new versions with freshly handmade features as quickly to the market as possible. Meaning that the app needs to be updated every couple of days.

One of the downsides is that sometimes I release too early and unintentionally add some bugs (currently performance issues). Or the users got kind of used to old features and are now confronted with new ones (as with the Material Design makeover).

But as I always say: If you don’t continue enhancing your apps and stop developing, they die!

And I won’t let our baby die! So keep tuned for new features.

View all posts by electrobabe